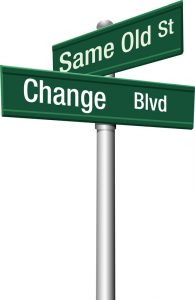 Last week at the deliver:Agile conference in Nashville I attended a talk by Autumn Crossman explaining the benefits of functional programming to us old timey object-oriented designers. I also attended the session led by Declan Whelan and Sean Button, on “Overcoming dys-functional programming. Leverage & transcend years of OO know-how with FP.”

The implication in both talks was that although objects have strengths, they are often abused and not powerful enough for some of today’s problems. And that now is an opportune time for us OO designers to make some changes to our preferred ways of working.

Yet I find myself asking: when should I step away from what I’ve been doing and know how to do well and step into a totally new design approach?

No doubt, functional programming is becoming more popular. But objects aren’t going away, either.

There are some benefits of pure functional solutions to certain design problems. Pure functional programming solutions don’t have side effects. You make stream-processing steps easily composable by designing little, single purpose functions operating over immutable data. You are mutating data, it just isn’t being mutated in place. In OO terms, you aren’t changing the internal state of objects, you are creating new objects with different internal state. By using map-reduce you can avoid loop/iteration/end-condition programming errors (letting powerful functions handle those details). No need to define variables and counters. This is already familiar to Smalltalk programmers via do:, collect:, select:, and inject:into: methods which operate on collections (Ruby has its equivalents, too). And by operating on immutable data, multi-threading and parallelization get easier.

But I can create immutable data using OO technology, too. Ever hear of the Value Object pattern? Long ago I learned to create designs that included both stateful and immutable objects. And to understand when it is appropriate to do so. I discovered and tweaked my heuristics for when it made sense to stream over immutable data and when to modify data in place. But in complex systems (or when you are new to libraries) it can be difficult to suss out what others are doing (or in the case of libraries, what they are forcing you to do).

But that’s not the point, really. The point is, once you understand how to use any technique, as you gain proficiency, you learn when and where to exploit it.

But is pure functional programming really, finally the panacea we’ve all been looking for? Or is it just another powerful tool in our toolkit? How powerful is it? Where is it best applied?

I’m still working through my answers to these questions. My answers will most likely differ from yours (after all, your design context and experience is different). That’s OK.

Whenever we encounter new approaches we need to reconcile them with our current preferred ways of designing. We may find ourselves going against the grain of popular trends or going with the flow. Whatever. We shouldn’t be afraid of trying something new.

Yet we also shouldn’t too easily discount and discard approaches that have worked in the past (and that still work under many conditions). Or, worse yet, we shouldn’t feel anxious that the expertise we’ve acquired is dated or that our expertise can’t be transferred to new technologies and design approaches. We can learn. We can adapt. And, yet, we don’t have to throw out everything we know in order to become proficient in other design approaches. But we do have to have an open mind.

We also shouldn’t be seduced by promises of “silver bullets.” Be aware that evangelists, enthusiasts, and entrepreneur frequently oversell the utility of technologies. To get us to adopt something new, they often encourage us to discard what has worked for us in the past.

While I like some aspects of functional programming, I see the value in multi-paradigm programming languages. I’m not a purist. Recently I’ve written some machine learning algorithms in Python for some Coursera courses I’ve taken. During that exercise, I rediscovered that powerful libraries make up for the shortcomings and quirks of any programming language. I still think Python has its fair share of quirks.

And while some consider Python to support functional programming, it isn’t a pure functional language. It takes that middle ground, as one stack overflow writer observes:

“And it should be noted that the “FP-ness” of a language isn’t binary, it’s on a continuum. Python doesn’t have built in support for efficient manipulation of immutable structures as far as I know. That’s one large knock against it, as immutability can be considered a strong aspect of FP. It also doesn’t support tail-call optimization, which can be a problem when dealing with recursive solutions. As you mentioned though, it does have first-class functions, and built-in support for some idioms, such as map/comprehensions/generator expressions, reduce and lazy processing of data.”

Python’s a multi-paradigm language with incredible support for matrix operations and a wealth of open machine learning open source libraries.

I haven’t had an opportunity to dial-up the knobs and solve larger design problems in a pure functional style. I hope to do so soon. My current thinking about a pure functional style of programming is that it works well for streaming over large volumes of data. I’m not sure how it helps support quirky, ever-changing business rules and lots of behavioral variations based on system state. Reconciling my “go to” design approaches with new ways of working takes some mental lifting and initial discomfort. But when I do take the time to new design approaches, I have no doubt that I’ll find some new heuristics, polish existing ones and learn more about design in the process.