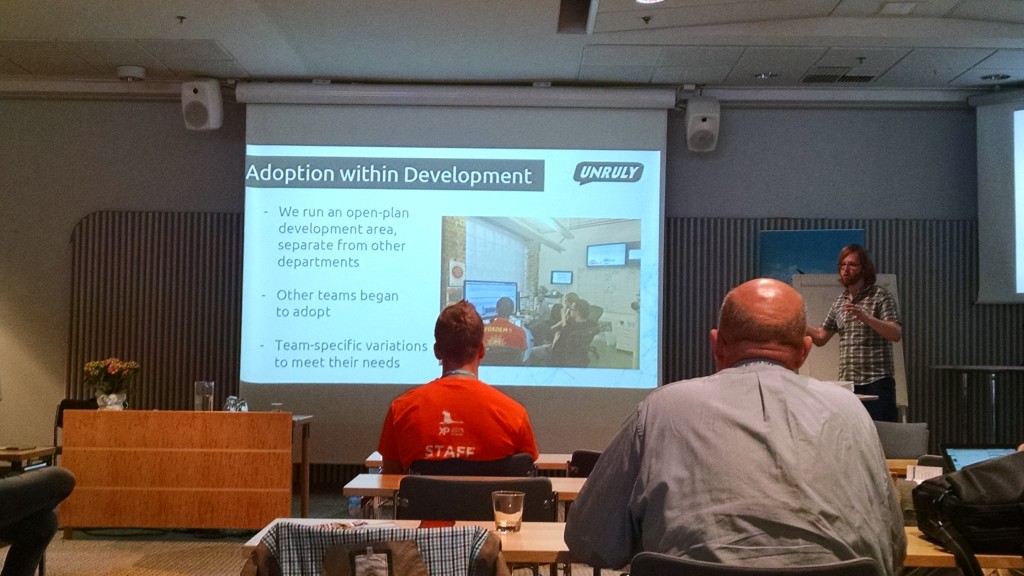 The latest report in the Agile Experiences Program has just been published. It is a story by Jason Kerney about what it is like to join a Mob Programming Team.

Jason’s report started with a conversation over lunch at Agile 2014. Jason was sitting with his manager, Woody Zuill who reported on how mob programming was born and how it works in practice. Woody introduced Jason as the newest member of their mob.

Ever on the lookout for good stories (I’m Director of the Agile Experience Report Program), I asked Jason what it was like to join the mob. And thus began a conversation which after a lot of hard work by Jason turned into this latest report.

When he first joined the team, Jason was hyper vigilant. Not wanting to let his new team down, he found it hard to take any breaks. For the first few weeks he would go home from work exhausted. By accident one day he discovered that if he stepped away from the team for awhile, he could catch up in a just a few minutes. He had stumbled on a sustainable rhythm for mob programming and went home from work energized.

Jason’s initial hyper vigilance reminds me of my first two weeks on the job as a forest service lookout. I was constantly scanning for fires through my binoculars. I got eyestrain. After two weeks, I just couldn’t keep up my constant surveillance. So I backed off to looking for fires every 15 minutes. That was plenty of attention. No fire is going to explode and burn down the entire forest in 15 minutes.

Jason also shares a keen observation into the collective way his team dynamically works. He likens how they each pay attention to different things as being like a howling wolf pack (where no two wolves sing at the same frequency). Wolves just join in and find an agreeable pitch. Mob programmers who are paying attention to their teammates find a way to contribute what’s “missing”. Jason finds mob programming powerful because:

“In coding, there are a lot of things to think about, architecture, design, the problem at hand, coding standards, testing, deployment, business impact and security to name a few. I have found that our mob treats each of these like a wolves’ howling frequency. We each take one or a few and pay attention to those. If someone else appears to be covering it, we choose something else. None of this is an active decision, it just happens.”

Don’t dismiss Mob Programming as a simple variant of an XP programming team. There’s more to it.

If you have an itch to write and share your agile experiences, please feel free to contact me at rebecca at wirfs hypen brock dot com. I know that writing is hard work. I want to hear your intriguing stories and help you tease out your wisdom. I can help you find a voice in your writing. We learn from experience (especially when we reflect on it). And it’s a wondrous gift to share your experiences with others. Thanks for sharing, Jason.