The Browser is a Transitional Technology

on January 31, 2011
in Ambient Computing, Browsers 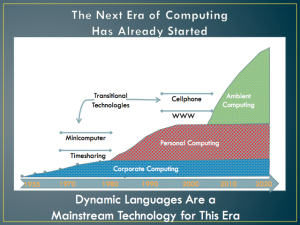 Transitional technologies that preceded the emergence of the Personal Computing Era included time-sharing and minicomputers.  Both of these technologies emerged as corporate computing matured and both technologies personalized, to a degree, human interaction with corporate computing resources.  Time-sharing allowed individuals to directly access a fractional share of large mainframe computing resources.  Minicomputers reduced the cost and complexity of computers to the point where they could be applied to departmental level problems and could be programmed or administered by individuals.

Time-sharing and minicomputers were significant steps towards the Personal Computing Era as they offered the first glimpses of what is possible when a computer is used to empower individuals. Most of the earliest personal computers physically resembled minicomputers and their operating systems were modeled after minicomputer OSes  and time-sharing user interfaces.  However, the true archetype of the modern personal computer anticipated something very different than a scaled down corporate computer.

My diagram shows cellphones and the “www” as two of the transitional technologies from the Personal Computing Era to the Ambient Computing Era. By “www” I meant both the concept of ubiquitous information access via public websites and the personal computer hosted browser applications used to access such information.  Both cellphones and the web established themselves as mainstream technologies in the 1990’s, just as personal computing was reaching maturity.  Both are personal and task-centric.  The browser itself is the epitome of a Personal Computing Era application program.

Right now, we seem to be in second golden age of browser innovation but that doesn’t mean that the browser, as we know it, will continue into the Ambient Computing Era.  Recall that Digital Equipment Corporation, the minicomputer company that grew into the world’s second largest computer company, hit the all-time high for its stock in 1987. That was the same year that Apple introduced the Mac II and Microsoft introduced Windows 2.0. Ten years latter the Personal Computing Era was firmly established but DEC and the minicomputer were no more.

For those of us to work on browser technologies that means it isn’t good enough to just create a great new PC-based web browser release every year or two (or even every 6 weeks, or every three months). We also have to aggressively work on the new technologies and user experiences that will make the web browser irrelevant.  Personally, I expect that many web technologies including HTML, CSS, and JavaScript are going to be foundational for the Ambient Computing Era but I don’t expect them to be packaged in a browser-like application running on running on a Windows or Mac PC. That transition has already started.