How Smalltalk Became a AI Language 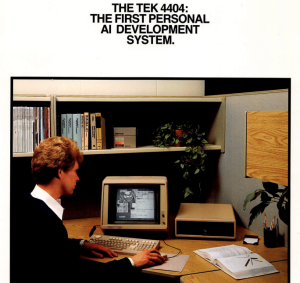 There is a story behind how Tektronix Smalltalk became branded as an AI language in 1984.

In the 1960s-70s, Tektronix Inc had grown to become an industry leading electronics competing head-to-head with Hewlett-Packard.  In the early ’80s Tektronix was rapidly going digital and money was being poured into establishing a Computer Research Lab (CRL) within Tek Labs. Two early successful CRL projects was my effort to create a viable performance Smalltalk virtual machine that ran on Motorola 680xx family processors and Roger Bates/Tom Merrow’s effort to develop an Alto-like 680xx based workstation for use in the lab.

The workstation was called the Magnolia and eventually over 50 of the were built. One for everybody in the fully staffed CRL. Tom’s team ported Unix to Magnolia and started working on Unix window mangers. I got Smalltalk-80 up on it using my virtual machine implementation.

CRL was rapidly staffing up with newly hired PhD-level CS researchers and each of them got a Magnolia. They were confronted with the choice of programming in a multi-window but basically shell-level Unix environment or a graphically rich Smalltalk live dev environment.  Most of them, including most of the AI group, chose to build their research prototypes using Smalltalk— particularly after a little evangelism from Ward Cunningham. Many cool projects were built and demonstrated to Tek executives at the annual Tek Labs research forums (internal “science fairs”) in ’81-’83.

During that time there was a lot of (well deserved) angst within Tek about its seeming inability to timely ship new products incorporating new technologies and addressing new markets. At the fall 1982 research forum Tom, myself, and Rick LeFaive, CRL’s director, (and perhaps Ward) sat down with some very senior Tek execs in front of a couple of Magnolias and ran through the latest demos. The parting words from the execs were: “We have to do something with this!”

Over the next couple months Tom Merrow and I developed the concept for a “low-cost” ($10k) Smalltalk workstation.  Rebecca Wirfs-Brock had been software lead of the recently successful 410x “low cost” graphics terminals and we thought we could leverage its mechanicals for our workstation. Over the first half of ’83 Roger Bates and Chip Schnarel prototyped a 68010-based processor and display that would fit inside a 4105 enclosure. It was code named “Pegasus”.

After much internal politics, in late summer of 1983 we got the go ahead to turn Pagasus into a product. An intrapreneurial “special products unit” (SPU) was formed to take Pegasus to market. The SPU management was largely the team that had initially done the 410x terminals.

So, finally we get to the AI part of the story. Mike Taylor was the marketing manager of the Pegasus SPU. One day in late August of ’83 I was chatting with Mike in a CRL corridor. He says something like: Smalltalk is very cool but to market it we have to tell people what they can use it for?

I initially muttered some words about exploratory programming, objects, software reuse, etc. Then I paused, as wheels turned in my mind. AI was in the news because of Japan’s Fifth Generation Computing Initiative and I had just seen an of issue Time magazine that included coverage of it. I thought: objects, symbolic computing, garbage collection, LISP and responded to Mike: Smalltalk is an AI language.

Mike said: What!?? You mean Pegasus is a $10K AI machine? That’s something I can sell!

Before I knew what happened the Pegasus SPU was rechristened as AIM (AI Machines) and we were trying to figure out how we were going to support Common Lisp and Prolog in addition to Smalltalk.

The Pegasus was announced as the Tektronix 4404 in August 1984 at that year’s AAAI conference. The first production units shipped in January 1985 at a list price of $14,950. Even at that price it was considered a bargain.

Demo video of Tek Smalltalk on a Tektronix 4404