A Cloud on Your Ceiling? 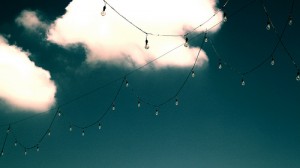 I’ve previously written that we are in the early stages of a new era of computing that I call “The Ambient Computing Era”.  If we are truly entering a new era then it is surely the case that the computers we will be using twenty or more years from now will exist in forms that are quite unlike the servers, desktop PCs, phones, and tablets we use today.  We can at best speculate or dream about what that world may be like.  But some of my recent readings about emerging technologies have inspired me to think about how things might evolve.

This week I learned about “WiGig” which is WiFi operating on 60GHz radio frequencies.  WiGig router chip sets already exist and support a theoretical throughput of 7Gbps.  The catch is that 60GHz radio wave won’t penetrate walls or furniture.  So if you want to have really high bandwidth wireless communications from something in your lap or on your sleeve to that wall-size display, you are probably going to want to hang a WiGig router on your ceiling. If your room is large or has a lot of furniture you may need several.

This got me thinking about what other sort of intelligent devices we may be hanging on our ceilings. The first thing that came to mind was LED lighting.  Until very recently, I was one of those people who would make jokes about assigning IP address to light bulbs.  But recently I was at a friend’s house where I saw exactly that: network addressable smart LED light bulbs.  It turns out that a little intelligence is actually useful in producing optimal room light with LEDs and when you have digital intelligence you really want to control it with something more sophisticated than a simple on/off switch.  So get ready for lighting with IP6 addresses. But they probably won’t be bulb shaped.

Both WiGig routers and networked LED room lighting are still too expensive for wide adoption, but like all solid state electronic devices we can expect their actual cost to approach zero over the next twenty or so years.  So there we have at least two kinds of intelligent devices that we probably will have hanging from our ceilings. But will they really be separate devices?  I could easily image a standardized ceiling panel, let’s say a half meter square consisting of LED lighting, a WiGig router, and other room electronics.  A standardized form factor would allow our homes and offices to be built (or updated) to include the infrastructure (power, external connectivity, physical mounting) that lets us easily service and evolve these devices. In honor of one of the most important web memes, I suggest that we call such a panel, a “CAT” or Ceiling Attached Technology.

So, what other functionality might be integrated on a CAT? Certainly we can expect sensors including cameras that allow the panel to “see” into the room. A 256 or 512 core computing cluster with several terabytes of local storage also seems very plausible.  Multiple CATs in the same or adjoining rooms would presumably participate in a mesh network that ultimately links to the rest of the digital world via high-speed wired or wireless “last mile” connections. Basically, our ceilings and walls could become what we think of today as “cloud” data centers.

What sort of computing would be taking place in those ceiling clouds? One possibility is that our entire digital footprint (applications, services, active digital archives) might migrate to and be cached in the CATs that are physically closest to us.  As we move about or from location to location, our digital footprint just follows us.  No need to make long latency round trips to massive data centers in eastern Oregon or contend for resources with millions of other active users.

Of course, there are tremendous technology challenges standing between what we have today and this vision.  How do we maintain the integrity of our digital assets as they follow us around from CAT to CAT? How do we keep them secure and maintain our personal privacy?  What programs get to migrate into our CATs?  How do we make sure it’s not malicious? How do we keep our homes from becoming massive botnets?  That’s why I think it’s important for some of us to start thinking about where this new computing era is heading and how we want to shape it. We can start inventing the ambient computing world just like Alan Kay and his colleagues at Xerox PARC started in the early 1970’s with the vague concept of a “Dynabook“ and went on to invent most of the foundational concepts that define personal computing.

If you find yourself thinking about “Post-PC Computing” keep in mind that the canonical computer twenty years from now will probably look nothing like a cell phone or tablet. It may look like a ceiling tile. I hope this warps your thinking.