Working Outside the Blue Bubble

on May 6, 2013
in Ambient Computing, Conferences

I written before about a transition period to a new era of computing. Earlier this month I gave a keynote talk at the Front-Trends conference in Warsaw.  In preparing this talk I discovered a very interesting graphic created by Asymco for an article about the Rise and Fall of Personal Computing.   It was so interesting that I used it to frame my talk. Here is what my first slide looked like, incorporating the Asymco visualization: 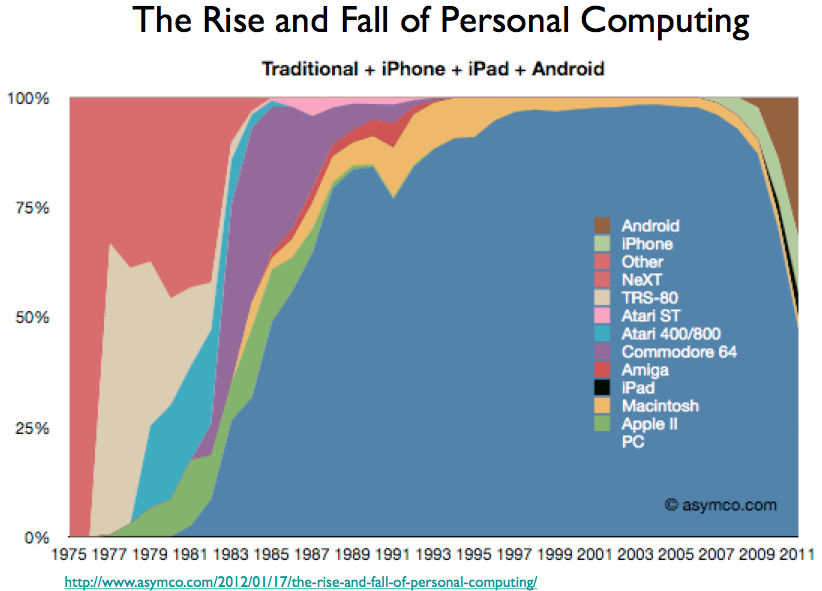 This graph is showing market-share of various computing platforms since the very first emergence of what can be characterize as a personal computer.  I urge you to read the Asymco article if you are interested in the details of this visualization.   Keep in mind that it is showing percentage share of a rapidly expanding market. Over on the left edge we are talking about a total world-wide computer population that could be measured in the low hundreds of thousands.  On right we are talking about a market size in the high hundreds of millions of computers.

For my talk, I used the graph as an abstraction of the entire personal computing era. The important thing was that there was a period of around ten years before the Windows/Intel PC platform really began to dominate.  I remember those days. I was a newly graduated software engineer and those were exciting times.  We knew sometime big was happening, we just didn’t know for sure what it was and how it was all going to shake out.  Each year there was one or more new technologies and companies that seems to be establishing themselves  as the dominant platform.  But then something changed and within a year or two somebody else seemed to be winning.  It wasn’t until  the latter part of the 1980’s that the Wintel platform could be identified as the clear winner. That was the beginning of a 20+ year period that, based upon this graph, I’m calling the blue bubble.

While many interesting things (for example, the Web)  happened during the period of the blue bubble, overall it was a much less exciting time to be working in the software industry. For most of us, there was no option other than to work within the confines of the Wintel platform.  There were good aspects to this as a fixed and relatively stable platforms provided a foundation for the evolution of PC-based applications and ultimately the applications were what  was most important from a user perspective. But as a software developer, it just wasn’t the same as that earlier period before the bubble formed. To those of us who were around for the first decade of the PC era there were just too many constraints inside the bubble. There were still plenty of technical challenges, but there wasn’t the broad sense that we were all collectively changing the world.  But then, the blue bubble became normal. Until very recently,  must active software developers have never experienced a professional life outside that bubble.

The most important thing for today is what is happening on the right-hand side of this graph.  Clearly, the big blue bubble is coming to an end. This coincides with what I call the transition from the Personal Computing Era to the Ambient Computing Era.  Many people thank we are already inside the next blue bubble.  That Apple, or Google, or many be even “the Web” has already won platform dominance for the next computing era.  Maybe so, but I doubt it.  Here is a slide I used at the end of my recent talk: 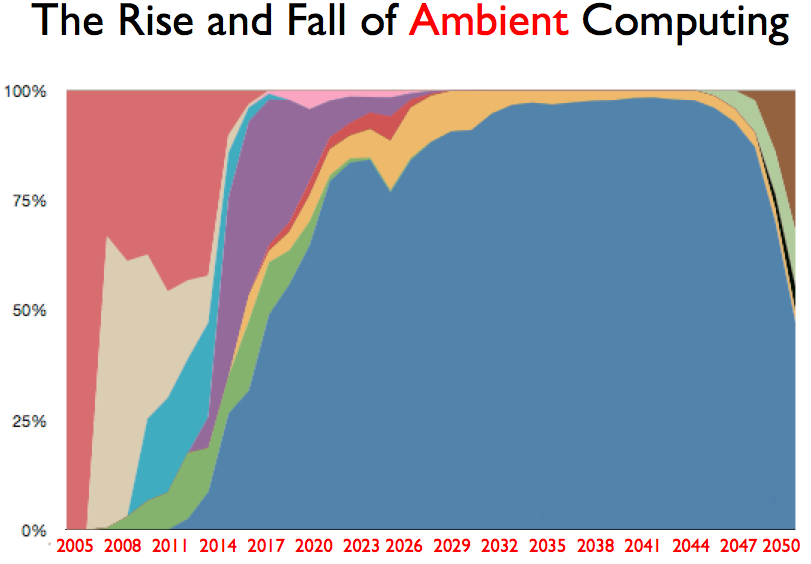 It’s the same graphic.  I only removed the platform legend and changed the title and time line. The key point is that we probably aren’t yet inside the next blue bubble.  Instead, we are most likely in a period that is more similar to the first ten years of the PC Era.  It’s a time of chaotic transition.  We don’t know for sure which companies and technologies map to the colors in the  graph.  We also don’t know the exact time scale;  2013 isn’t necessarily equivalent to 1983.  It’s probably the case that the dominant platform  of the Ambient Computing Age is not yet established. The ultimate winner may  already be out there along with several other contenders.  We just don’t know with certainty how it’s all going to come out.

We’re all collectively creating a new era of computing.  Own it and enjoy the experience!