Some ECMAScript Explanations and Stories for Dave 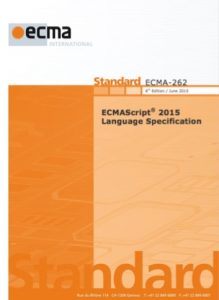 Dave Winer recently blogged about his initial thoughts after dipping his toes into using some modern JavaScript features . He ends by suggesting that I might have some  explanations and stories about the features he are using.  I’ve given talks that cover some of this and normally I might just respond via some terse tweets. But Dave believes that blog posts should be responded to by blog posts so I’m taking a try at blogging back to him.

What To Call It?

Standards organizations like to identify documents using numbers. The ECMAScript specification’s number is ECMA-262.  Each time an update to the specification is approved as “the standard” a new edition of ECMA-262 is released. Editions are sequentially numbered. Dave said “ES6 is the newest version of JavaScript”.  So, what is “ES6”? ES6 is colloquial shorthand for “ECMA-262, Edition 6”.  ES6 was published as a standard in 2015. The actual title of the ES6 specification is ECMAScript 2015 Language Specification and the preferred shorthand name is ECMAScript 2015 or just ES2015.

So, why the year-based designation?  The 6th edition of ECMA-262 took a long time to develop, arguably 15 years. As ES6 was approaching publication, TC39 (the Technical Committee within Ecma International that develops the ECMAScript specifications) already knew that it wanted to change its process in a way that enabled  yearly maintenance updates.  That meant a new edition of ECMA-262 every year with a new edition number. After a few years we would be talking about ES6, ES7, ES8, ES9, ES10, ES11, etc. Those numbers quickly loose any context for people who aren’t deeply involved in the standards development process. Who would know if the current standard ES7, or ES8, or ES9? Was some feature introduced in ES6 or ES7? TC39 couldn’t eliminate the actual edition numbers (standards organizations love their document numbers) but it could change the document title.  We decide that TC39 would incorporate the year of release into the documents title and to encourage people to use the year when referring to a specific edition. So, the “newest version of JavaScript” is ECMA-262, Edition 8 and its title is  ECMAScript 2017 Language Specification. Some people still refer to it as ES8, but the preferred shorthand name is ECMAScript 2017 or just ES2017.

But saying “ECMAScript” or mentioning specific ECMAScript editions is confusing to many people and probably is unnecessary for most situations.  The common name of the language really is JavaScript and unless you are talking about the actual specification document you probably don’t need to utter “ECMAScript”. But you may need to distinguish between old versions of JavaScript and what is implemented by newer, modern implementations.  The big change in the language and its specification occurred with  ES2015.  The subsequent editions make relatively small incremental extensions and corrections to what was standardized in 2015.  So, here is my recommendation.  Generally you should  just say “JavaScript” meaning the language as it is used in browsers, Node.js, and other environments.  If you need to specifically talk about JavaScript implementations that are based upon ECMAScript specifications published prior to ES2015 say “legacy JavaScript”. If you need to specifically talk about JavaScript that includes ES2015 (or later) features say “modern JavaScript”.

Can You Use It Yet?

Except for modules almost all of ES2015-ES2017 is implemented in the current versions of all the major evergreen browsers (Chrome, Firefox, Safari, Edge). Also in current versions of Node.js. If you need to write code that will run on non-evergreen browsers such as IE you can use Babel to pre-compile modern JavaScript code into legacy JavaScript code.

The main motivation for block scoped declarations was to eliminate the “closure in loop” bug hazard that may JavaScript programmer have encountered when they set event handlers within a loop. The problem is that var declarations look like they should be local to the loop body but in fact are hoisted to the top of the current function and hence each event handler defined in the loop use the last value assigned to such variables. 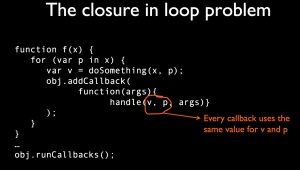 Replacing var with let gives each iteration of the loop a distinct variable binding.  So each event handler captures different variables with the values that were current when the event handler was installed: 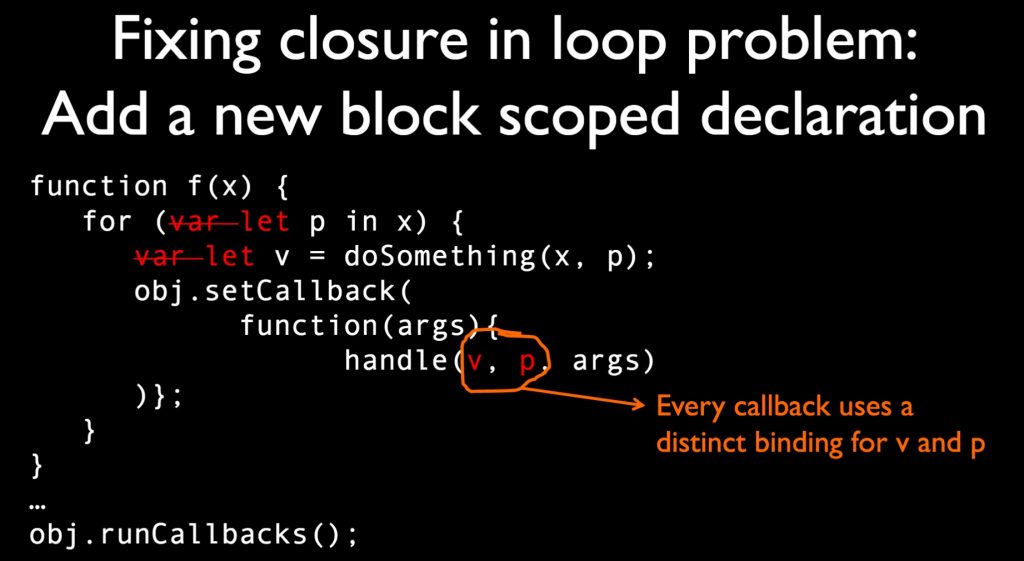 The hardest part about adding block scoped declaration to ECMAScript was coming up with a rational set of rules for how the declaration  should interact with the already existing var declaration form. We could not change the semantics of var without breaking backwards compatibility, which is something we try to never do. But, we didn’t want to introduce new WTF surprises in programs that use both var and let. Here are the basic rules we eventually arrived at: 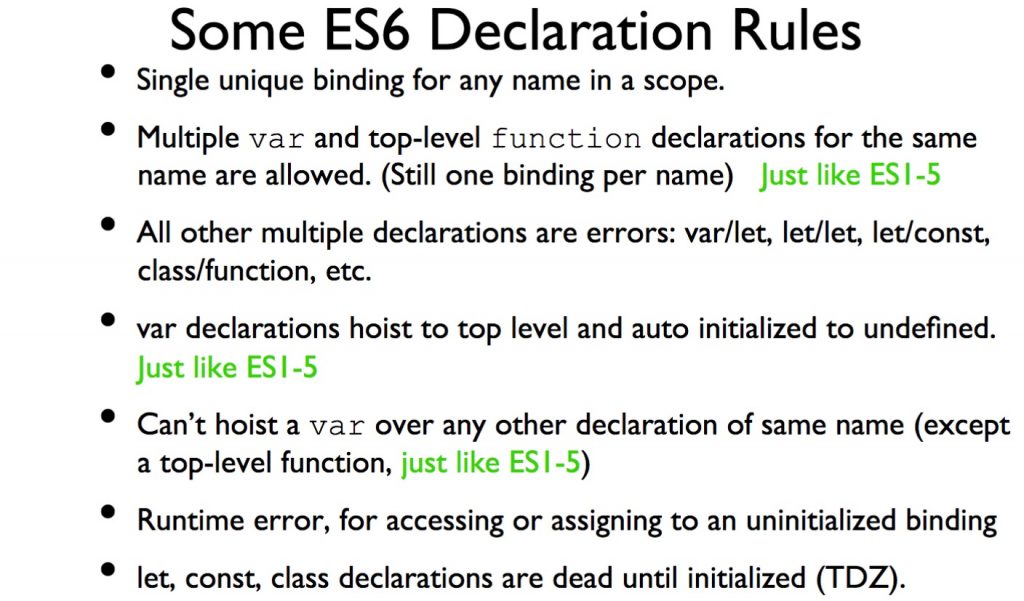 Most browsers, except for IE, had implemented const declarations (but without block scoping) starting in the early naughts. Firefox implemented block scoped let declaration (but not exactly the same semantics as ES2015) in 2006.  By the time TC39 started serious working on what ultimately became ES2015, the keywords const and let had become ingrained in our minds such that we didn’t really consider any other alternatives. I regret that.  In retrospect, I think we should have used let in place of  const for declaring immutable variable bindings because that is the most common use case. In fact, I’m pretty sure that many developers use let instead of const for variable they don’t intend to change, simply because let has fewer characters to type. If we had used let in place of const then perhaps var would have been adequate for the relatively rare cases where a mutable variable binding is needed.  A language with only let and var would have been simpler then what we ended up with using const, let, and var.

I’ve heard several JS programmers comment that at first they didn’t like arrow functions but that they grew upon them over time. Your mileage may vary. Here are a couple of good articles that address arrow function reluctance.

The work on the ES module design actually started before the first release of Node. There were early proposals for dynamic module interfaces that are more like what Node adopted.  But TC39 made an early decision that declarative static module interfaces were a better design, for the long term. There has been much controversy about this decision. Unfortunately, it has created issues for Node which have been difficult for them to resolve. If TC39 had anticipated the rapid adoption of Node and the long time it would take to finish “ES6” we might have taken the dynamic module interface path. I’m glad we didn’t and I think it is becoming clear that we made the right choice.

Strictly speaking, the legacy JavaScript language didn’t do async at all.  It was host environments such as  browsers and Node that defined the APIs that introduced async programming into JavaScript.

ES2015 needed to include promises because they were being rapidly adopted by the developer community (include by new browser APIs) and we wanted to avoid the problem of competing incompatible promise libraries or of a browser defined promise API that didn’t take other host environments into consideration.

The real benefit of ES2015 promises is that they provided a foundation for better async abstractions that do bury more of the BS within the runtime.  Async functions, introduced in ES2017 are the “better way” to do async.  In the pipeline for the near future is Async Iteration which further simplifies a common async use case.