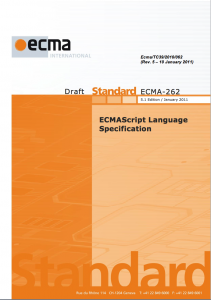 The latest JavaScript language standard, ECMAScript 5, was approved by the Ecma International General Assembly one year ago.  Since then it has seen rapid adoption in new browsers releases.

Once approved by Ecma, ES5 entered a process to become an ISO standard. That process should be completed in early 2011.  The ISO edition of the ES5 specification incorporates a number of editorial and technical corrections including those listed in the current ES5 errata.

In order to keep the ISO and Ecma specifications in strict alignment TC39, the Ecma standards committee responsible for ECMAScript,  has prepared a revision to the ES5 spec. whose content is identical to the ISO version. It also includes a new Annex F that lists the technically significant changes incorporated into the revision. This revision will be known as Ecma-262, Edition 5.1.  We’ll probably just talk about it as ES5.1.

The final draft of the ES5.1 spec. is now available from the TC39 wiki.

Keep in mind that this is only a maintenance revision of the ES5 specification.  It contains no new language or library features.  TC39 is continuing its longer term work on “ECMAScript Harmony” which is intended to be the next version to include any new features.